The 100th wind turbine of EDF Luminus is located on the Kluizendok site in the Ghent port area. This installation was built at the end of 2015 – meanwhile 14 new turbines have been built at other sites in Belgium – and symbolises the importance the company attaches to wind power, a green and reliable solution to combat climate change effectively. This wind turbine has been inaugurated today in the presence of Ms Joke Schauvliege, Flemish minister of Environment, Nature and Agriculture. In her speech, Ms Schauvliege emphasized the importance of renewable energy: “Flanders undertakes to generate more than ten percent of renewable energy by 2020 within the scope of the intra-Belgian climate efforts. In 2014, this share was only five and a half percent. We have a lot of catching up to do. At present, wind turbines generate about 900 GWh of electricity per year, enough to power a quarter of a million homes. With each new wind turbine, our share of renewable energy increases. So each additional wind turbine is a step in the right direction.”

Grégoire Dallemagne, CEO of EDF Luminus, stated as follows: “EDF Luminus made its first entry in the world of wind power in 2001 and currently operates 114 wind turbines, which makes us the number 1 on the Belgian market with a market share of 16%. Between 2015 and 2018, EDF Luminus will invest € 600 million mainly in renewable energy and energy services. Today marks a milestone in the company’s history because we are celebrating our 100th wind turbine. However, what fascinates me even more is the realisation that behind these installations there’s something valuable: our colleagues, men and women who commit themselves to our planet and put time and energy in the conversion of wind energy into electricity each and every day. I dedicate this event to them.”

The 100 ha Kluizendok site located in the port of Ghent was put into service in 2005. In May of that year, EDF Luminus, in cooperation with the port authorities of Ghent and Ecopower (which owned 20%, with the remaining 80% held by EDF Luminus), started building a 1st wind farm with 11 wind turbines, each with a capacity of 2 MW, enough to power 10,000 homes. It was the first wind farm of EDF Luminus in an industrial area. 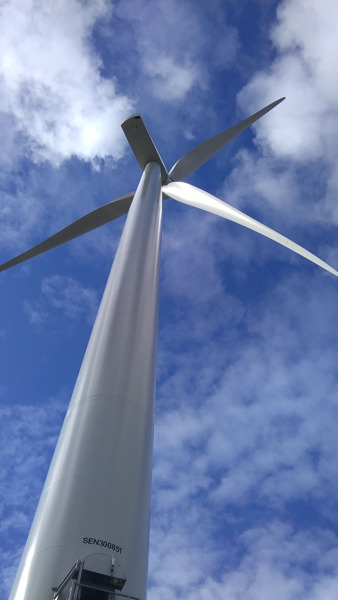